Dick and Betty Klopcic build an intimate, 60’ X 60’ pyramid-shaped restaurant with seating for 120 diners. Naming it The Fireside after the cozy fireplace at its center, they offer the finest foods and exceptional service. People drive for miles and miles every night of the week to experience this unique new restaurant designed by Fort Atkinson architect Helmut Ajango. Its reputation for quality brings old friends and new to visit time and time again.

The restaurant proves to be so popular that the Klopcic family expands it four times during this period to accommodate the ever-increasing demand for dining space. Also during this time, The Fireside Theatre becomes known for fabulous wedding receptions and private parties.

The Fireside restaurant building is joined to another building nearby that had previously housed an art gallery. The Klopcics transform this new space into a spectacular 435 seat theatre-in-the-round. Ed Flesch joins The Fireside Theatre staff as the theatre’s Artistic Director. Beginning with Rodgers & Hammerstein’s SOUTH PACIFIC, he will go on to produce all and direct most of more than 196 productions staged by The Fireside Theatre over the years. Each year he auditions more than 1,000 professional singers, actors and dancers, primarily in New York, in order to cast approximately 100 roles. 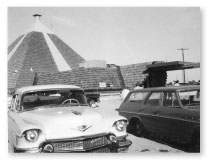 The Fireside’s small gift shop is doubled in size.

A show lounge next to the main theatre is remodeled into the main Showplace Shop you see today.

The Fireside Dinner Theatre undertakes a major renovation under the direction of Company President Rick Klopcic. The entire complex is upgraded to consistently welcome several thousand guests each week. 217 seats are added to the theatre, and the entire complex is made handicap accessible. The theatre receives state-of-the-art sound and lighting systems, and a hydraulic lift system is installed under the stage, improvements which add a spectacular new dimension to Fireside productions. A permanent Music Shop is added to the complex, along with coat-check rooms that become specialty shops in warmer months.

Ownership of The Fireside Dinner Theatre passes to the next generation. Dick and Betty’s oldest son Rick now carries on the tradition of family hospitality and excellence, along with his wife Jane. They dedicate themselves to maintaining The Fireside’s stellar reputation as the region’s premier entertainment venue well into the 21st century. Jane Klopcic also takes on the responsibility of managing the The Fireside’s five gift shops, staying current on the latest design and fashion trends, and seeking out the finest merchandise to offer patrons.

Long-time Fireside Executive Chef David Wolfram retires. He has been an integral member of The Fireside family since before the 1964 opening. Michael Scott, a 15-year veteran of The Fireside kitchens, is promoted to the position of Executive Chef. His training at the acclaimed Culinary Institute of America and his experience at several of the nation’s top dining establishments have prepared him well for this position. Rick and Jane’s son Ryan and his wife Kristi joined the management team as Executive Vice President and Human Resource Manager, respectively.

In September of 2015, Rick and Jane Klopcic sold The Fireside to their oldest son, Ryan and his wife Kristi. Rick continues to provide counsel and helps serve our guests while Jane continues to oversee the Gift Shops. Along with the change of ownership announcement, Ryan and Kristi announced plans for a multi-million dollar renovation of The Fireside to begin that fall. Renovations are expected to take two to three years to complete and will include updated paint, wall coverings, floor coverings, lighting, and furnishings throughout the facility.

Thousands of people return to The Fireside year after year, earning it a reputation as the Midwest’s premier dinner theatre and Wisconsin’s number one year-round motorcoach attraction. No wonder The Fireside Dinner Theatre has received numerous awards over the years for excellence in food, service and theatre. Today, a visit to The Fireside includes a theatrical adventure like no other, an incredible fine dining experience, the opportunity to purchase exceptional gifts and timeless treasures, and a beautiful memory to cherish forever. It truly is more than you’d ever expect.