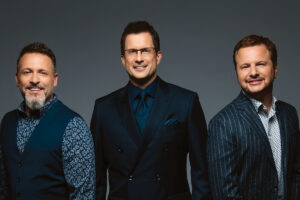 Michael, Paul, and Buddy love Gospel music. They believe it touches the soul and offers encouragement and hope. By singing and ministering to audiences through word and song, these gentlemen are fulfilling God’s call on their lives. Ron Booth Sr. immersed his sons in Southern Gospel music from an early age and the boys sang with him until he retired from the road in 1998. Now Michael Booth performs with Paul Lancaster and Buddy Mullins who bring along their success from work with previous groups including the award-winning Gaither Vocal Band. All three are deeply committed to musical excellence, yet have a greater desire to impact the hearts of those listening to their music. Refreshing humor, inspiring songs, and encouraging words are embedded in every concert. Both collectively and individually they have received awards such as Song of the Year, Album of the Year, Trio of the Year, Male Group of the Year, Best Live Performers, Artist of the Year, and others. While grateful for the recognition of their work, their aspiration is for all honor and glory to be God’s alone. 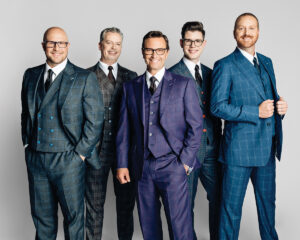 When the Legendary Cathedral Quartet retired in 1999, Scott Fowler and Roger Bennett decided to continue the rich musical tradition of Southern Gospel Quartet singing and Legacy Five was organized. Since that day, they have made a major mark on Southern Gospel Music. Audiences quickly responded to their four-part harmony and their ability to communicate the message of Christ. Since the quartet’s formation, they have established and maintained a firm place at the top of Christian music. In fact, Legacy Five has enjoyed more success in their short career than many groups experience in decades. They have also been featured on numerous tapings of the Gaither and Friends Homecoming Video series, appeared on In Touch with Dr. Charles Stanley, and are regulars at Shadow Mountain Community Church in El Cajon, CA. The rich four and five part harmony that Legacy Five has become noted for are the result of a masterful weaving together of five unique and versatile talents. Matt Fouch sings bass, Bryan Walker baritone, Scott Fowler Lead, and Lee Black tenor, with Josh Townsend on the piano.

All dates, times, prices and menus are subject to change.
Please check with the box office if you have any questions.

*All tickets subject to 5.5% sales tax. Tickets are not refundable. Tickets do not include tax, bar drinks or gratuity. There will be a $30.00 fee assessed for all returned checks. Dining is required for all performances. All dates, times, prices, and menus are subject to change.